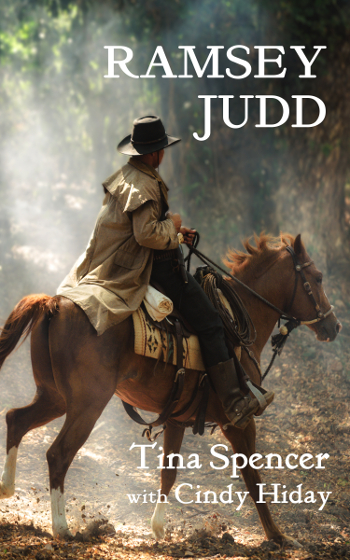 The Civil War robbed him of his identity and self-respect. Now he's ready to reclaim them both.

Twenty years ago, Union soldier Ramsey Judd ran away in the middle of battle. He was forced to keep running under an assumed name to avoid being apprehended and charged with desertion. Pushing old age and faced with his own mortality, he finally starts the long journey home. Along the way, he stops in a little place in Idaho to pay his respects to the girl he left behind.

But a lot has changed in his absence. Instead of a warm welcome, Ramsey finds himself at the center of a conflict between revenge and greed. He has one last chance to make things right – unless his health, or the law, catches up with him first.

Author note:   My dear cousin, Tina Spencer, wrote and published Ramsey Judd in 2008. The book received positive reviews and was a story I thoroughly enjoyed. So when it fell out of print, I encouraged Tina to re-publish.

But life happened, and my cousin ultimately entrusted me with copyright ownership and responsibility. Outside of some minor editing, little of the original text has been altered. Ramsey Judd is still very much Tina Spencer's story.

"Engaging, mature characters. I enjoyed... the historical references about the Snake River area..."

"What I loved the most was that the hero of the story...is an experienced, older man who is somewhat disappointed in his life so far and wants to improve that while he has a chance."