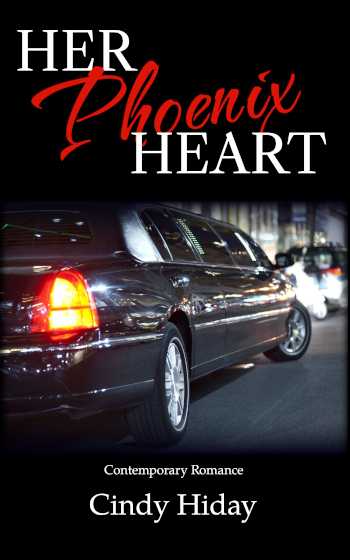 A contemporary story about renewal of the human spirit and a second chance at love.

After fleeing her abusive husband, Elizabeth Heart got a tattoo of a phoenix, symbolizing her rebirth. Four years later, her work in dermal pigmentation is helping others deal with disfiguring scars. Content in her new life, the last thing she needs is a colleague with roving hands. A jab to the nose puts a halt to the unwanted advance, but the tall, handsome-as-sin chauffeur who comes to her rescue isn't as easy to deal with. Not when his dimples make her pulse stumble and his smoke gray eyes invade her dreams. He promises not to box her in: no corners, no strings. But everyone has a hidden agenda, and when he touches her, he has her wanting dangerous things. Is she ready to risk her hard-earned independence, and possibly her very identity, again?

Still worked up over an argument with his teenage daughter earlier in the day, Tyler Stone is in no mood for diplomacy when his client accosts a woman in the back of his limousine. Leaving the bum to find his own way home is simple justice. But what to do about the woman with hair like fire and an attitude to match is more complicated. There's no mistaking her closely guarded heart, yet her compassion and vulnerability touch him in a way he can't ignore. Fate would seem to be on his side when he saves her kitchen from certain disaster and discovers a breach in her defenses. But does he have what it takes to heal the emotional scars that keep her phoenix heart from soaring?

"One of the best contemporary romances I have read this year. The only thing that I felt was missing is the recipe for Tyler's Pizza Soufflé. It sounds scrumptious!"
~Tracy Farnsworth, Romance Reviews Today

"Using the legendary phoenix bird as her theme, Cindy Hiday offers a story of a young woman trying to start over... Rise above it all and follow Her Phoenix Heart to a second chance at romance."
~Brenda Gayle for The Write Lifestyle